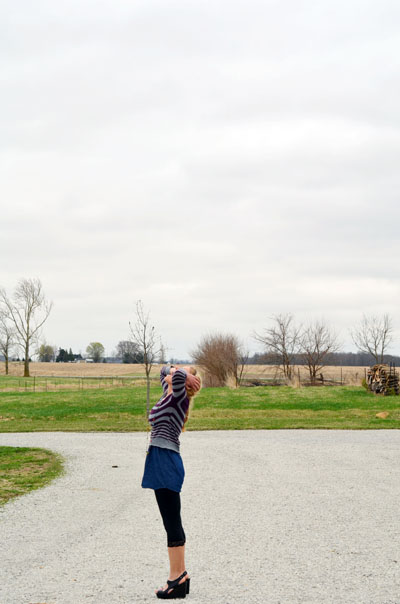 Why do centipedes always decide to show up when I’m in the bathroom?

It’s true. It seems every so often a centipede decides to venture out of hiding and into my presence during my pre or post shower phase. And a couple nights ago was not pretty.

I had just sat down on the toilet when I notice this little tiny thing moving on the floor. Centipede. Be still my beating heart!

I’m fine with rodents. They don’t scare me. I’m not a person who has ever jumped at a mouse or gotten squeamish looking at a mousetrap, but when it comes to centipedes, I am TERRIFIED. I can’t even look at picture of them without getting the heebie-jeebies.

So when I saw that little tiny thing moving on the floor, I felt instant terror. I grabbed a couple hundred Kleenexes from the box behind me and smashed that bug into the tile. I picked up the bunch of Kleenex and looked down just long enough to make sure I got him, and flushed him away into the toilet forever. I always flush these bugs. The last thing I want to see is a resurrected centipede crawling out of the trashcan.

That wasn’t so bad. I thought to myself. Maybe I was beginning to control my reaction to centipedes. I took my shower without a care in the world. I stepped out of the shower in much the same mind frame only to see a MASSIVE, and I’m talking six inch long, half inch wide with too many legs to contemplate, centipede emerge from the corner of the cabinet beneath the sink.

NO! I thought as I stood there dripping wet, hair gathering in clumps around my face. I try to curb my emotions (its midnight, people are sleeping), but a squeal erupts from my throat.

Right away I think two things:

I grab about half the Kleenexes from the box (don’t want my fingers to touch that ghastly creep) and pounce down on the bug, another squeal erupting from my lips. I count to five and slowly lift the bundle of tissues to see if he died.

I squeal again and the wormy leggy bug takes off running and I jump up on top of the toilet seat for safety. It disappears under the bathroom door and into the brown carpet of the hallway.

I have to burn my house down. Who knows, I could go to sleep in my bed tonight and wake up finding a centipede on the pillow beside me. I shudder. Heck no. I open the bathroom door carefully. No sign of him. Then I thought, better grab a towel, and wrap a towel around myself. I carefully, still standing on the bathroom tile, reach my arm to the wall to flip on the light switch. No movement. I get down on all fours and scan the carpeted ground. Still no sign of him.

I’m trapped in the bathroom. This is ridiculous. I carefully, very carefully, take a step into the hallway, followed by another careful step. I knew by now this guy definitely had to be hiding. He wasn’t out in the open. And so my bright idea was to stomp around the hallway until the sound and vibrations caused him to make a run for it. Three seconds later he dashed out from the side of the hallway and I squealed. He was heading down the hallway to the gap under my parents’ bedroom door.

Still clutching my mess of Kleenex with one hand, and holding up my towel with the other, I make a move towards the centipede and smash him into the doorframe, just as he was about to make a break for it on the other side. He’s not dead. I know he’s not dead yet. I squealed just thinking about it.

A very confused mother opens the bedroom door. “It’s a ginormous centipede,” I say in horror. “He’s not dead yet!” I’m too scared to let the Kleenex go and too scared to continue holding. My mom reached down and grabs the Kleenex from me, squishing the bug in the process.

I back way far down the hallway, dancing and squealing in fear, “FLUSH HIM! FLUSH HIM!”

My mom stands there with the monster’s remnants, and then starts to laugh.

“FLUSH HIM!” I continue to insist and dance further away in my towel. I wasn’t sure if she was going to throw it at me or what.

She flushed him, continued laughing and went back to her bedroom.

I paused, unsure as to whether my danger was really over, and then went back into the bathroom to put on my pajamas.