I throw my glove in the snow. This picture is just not turning out right.

I adjust the shutter speed, the aperture, the ISO, and carefully focus in on my subject. 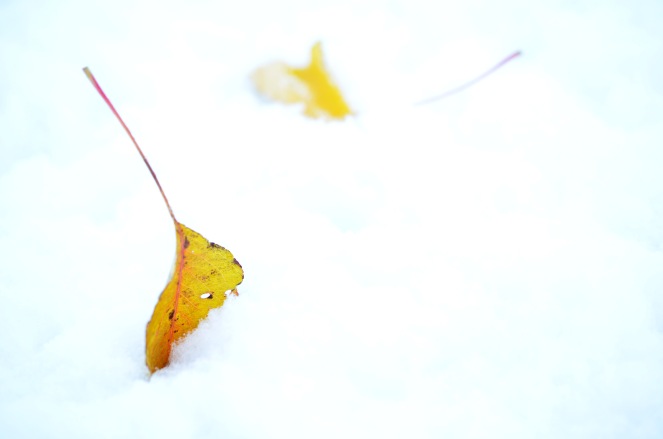 There! Fifty photos later I click through the photo previews, finally satisfied. I look up at what’s left of the sun. The days are becoming increasingly dark. It’s overcast, so the sun hasn’t made much of a presence anyway. I trudge along in the snow and the bright yellow leaves float to the contrasting white ground. The opposition intrigued me. I had to capture it. 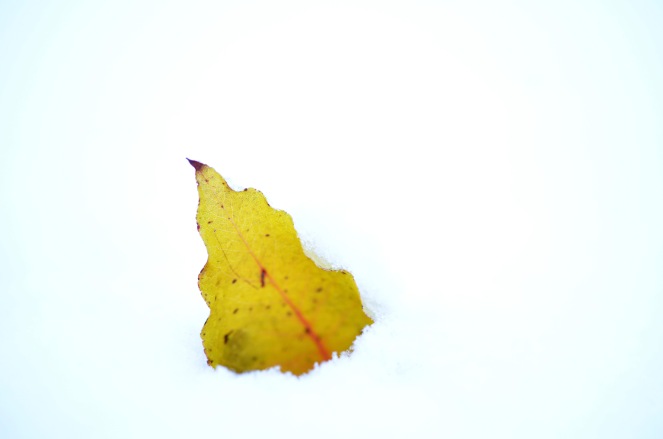 I am not patient.

Ideally, when I take a photo, I’d love for the first shot to be breathtaking, spectacular, and the carbon copy of what I had visualized in my brain. Rarely, very very very rarely does this happen. Most of the time its a pain-in-the-butt process. It’s a mulling attempt of shooting a couple of photos, previewing, adjusting settings, shooting a couple of photos again, more adjusting, different angles, more previewing, and repeating until I get everything where I want it to be. And the process becomes even longer when a tripod is involved. I alter the height and angle, trying to use the sun’s position to my advantage.

And the series doesn’t end there. I stick my camera’s SD card into my laptop, load the images on Photoshop or Lightroom, sort through to find the best, tweak the exposure, levels, curves, or whatever else needs done to achieve the effect I’m looking for, and save it to a corresponding folder. Then I open Safari, head on over to my WordPress dashboard, open a new post, upload photos to my media library, add and position those to my post, and then figure out what in the world I want to say, text-wise, to accompany these photos.

It most definitely is a process.

It would be nice if, every single time, I got the shot on the first try.

But, then again, would it?

I wouldn’t have a clue how a camera worked. I’d have no need to understand shutter speed or f-stops or ISO. I couldn’t switch a lens. I wouldn’t be able to conceive which angles looked best on a cookie and which looked best on a person. I wouldn’t know what colors photographed well, or that the “golden hour” produces beautiful sun flare. I wouldn’t have the growing fascination with nature photography or take walks to imagine just how I could duplicate what my eyes see, with a lens. I wouldn’t have the satisfaction of seeing my photography and knowing I had put the time and effort into its capture. I couldn’t show people my God-given take and my view of the world around me.

As much as I dread it sometimes, process is beneficially and absolutely vital. And the resulting end picture–it’s better because of it.

There’s purpose in the process.